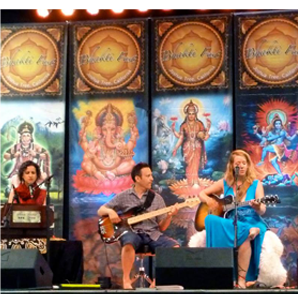 In January of 2001, I shaved my head bald (mundan) and traveled thousands of miles to India for the first time. A group of us went to the Maha Kumbha Mela in Allahabad and stayed and studied at the Kriya Yoga Institute. The Maha Kumbha Mela had over 70 million people in attendance over the two week celebration. It was so large you could see it from space. I had no idea what I had embarked upon or that it would send the trajectory of my life in a whole different direction. Before I left for India, I was in study mode reading Autobiography of a Yogi, I am Harmony; A Book About Babaji, and, of course, watching documentary footage of the Beatles first trip to India. In one fell swoop, I was taking Kriya Yoga classes, getting my head shaved again under the Banyan Tree where Babaji appeared to Sri Yukteswar and bathing in the marigold filled Sungum of the Great Mother Gange. And this was all before we made our way to a remote village in the north of India called Haidakhan.

In those days, to get to Haidakhan, you could go in through the riverbed with horses and mules or hike the road. We walked through the riverbed and arrived to a tiny village with a beautiful and simple ashram. And there I was quickly initiated into my new way of being-4am river baths, chandan, dhuni, Aarti, Karma Yoga, bathe, sing, sleep-wake up and do it all over again. I met amazing people from every part of the earth and my heart opened easily. A very sweet and talented musician named Turkantam sat me down and taught me all the chords to the Aarti. And one evening while struggling through the Aarti again, a clear disembodied voice said,”your name is Kalyani”. I looked at the translation to see it meant,”liberation”. Later, Shri Muniraji confirmed that name for me. And that voice was Babaji. Babaji has been my longtime friend, guide and companion ever since. He appears in dreams, gives me teachings, hints and redirections on the regular. I barely remember what life was like before I was conscious of his presence.

In 2004 I returned to Haidakhan for another washing. And in 2006, I bought the duplex I had been living in for 2 years. I immediately devoted it to Baba-not understanding the deep bowing that would be required to hold such a frequency in an urban neighborhood in Minneapolis, MN. I set up altars, dug a fire pit and did my best to sing, pray and bring people together. Overtime, we have had Numerous Kirtans, Aarti’s, House Concerts, Potlucks, Rituals, Ceremonies and Fires. 31 people have lived or stayed for an extended period of time at Baba’s House. And, like an ashram, I can tell now when there will be a changing of the guards…when it is someone else’s turn to live here.

Baba’s House has changed every aspect of my life. I see clients here daily and most of them don’t even ask about the photos of Babaji as we embark on their Akashic Reading or Rebirthing Breathwork Session. They just say that,”it feels so good here.” and “I feel so much better.” When I purchased Baba’s House, our neighborhood was experiencing a lot of crime and shootings. I remember many times asking for Baba’s protection as we had fire in the backyard with gunshots going off. And protection has come.

Going forward we are looking into solar power, rain barrels, expanding the gardens and a few renovations-including digging a separate dhuni for hawan. In the meantime, everyone who stays and lives here knows this is Baba’s House. It is a Blessing to Have a Lil Slice of Haidakhan in Minneapolis. We continue to travel to India and deepen the embodiment of all of these teachings and practices.  P.S. We are all avid Breathers too who are committed to working with Earth, Air, Water and Fire. Bhole Baba Ki Jai!